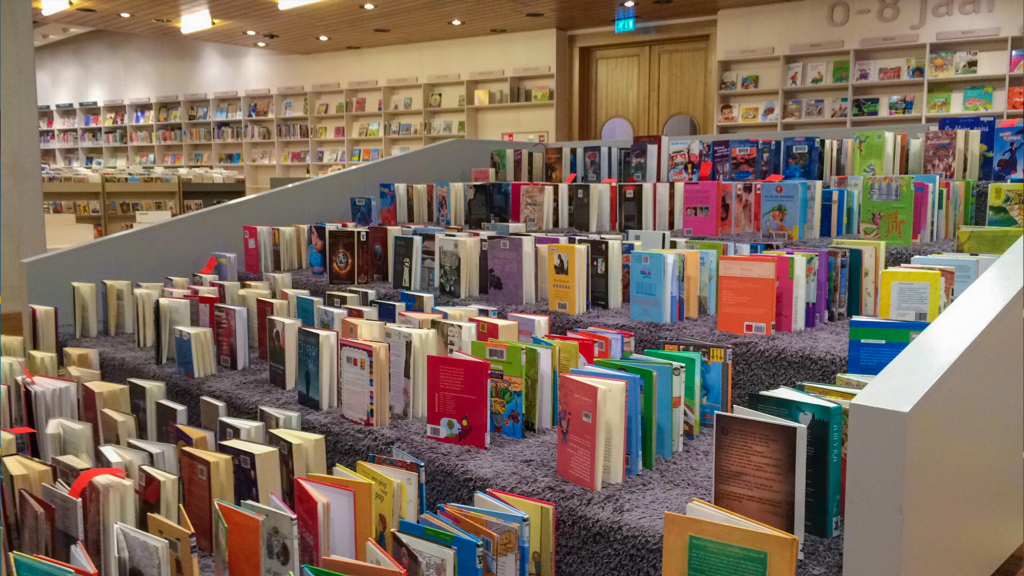 In 2015 we entered into a partnership with Rozet Arnhem to break the world record of domino with books. Because this is not a simple job, we directed dozens of volunteers to set up the thousands of books with us in time. The chain reaction ran across all floors of Rozet and ended in the […] 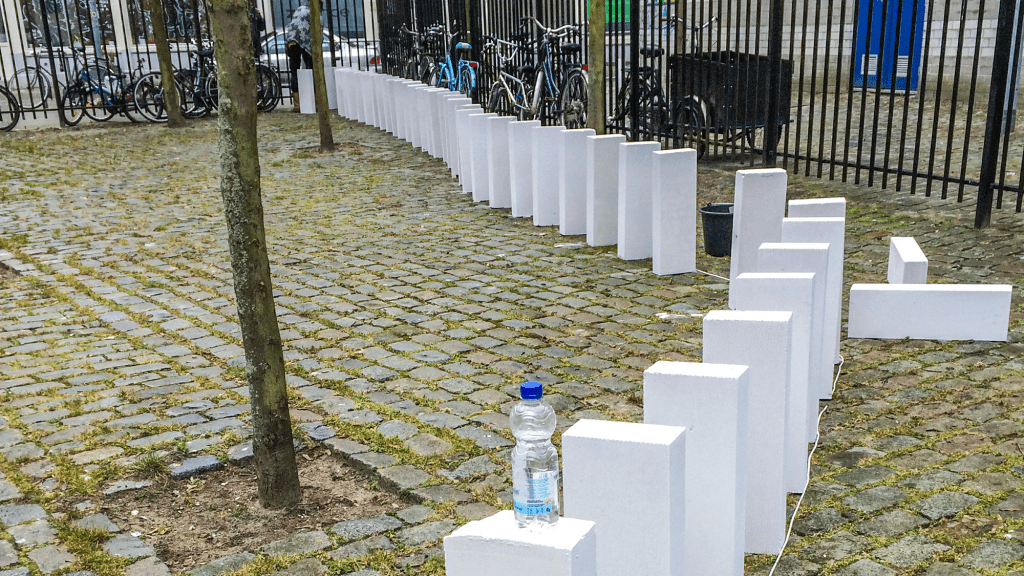 For Dominoes Rotterdam, we were challenged to participate in one of the most extraordinary chain reactions ever. A huge route was mapped out through the center of the Dutch city of Rotterdam with large concrete blocks. During this record attempt, many volunteers did their best to make the domino effect work from start to finish. […] 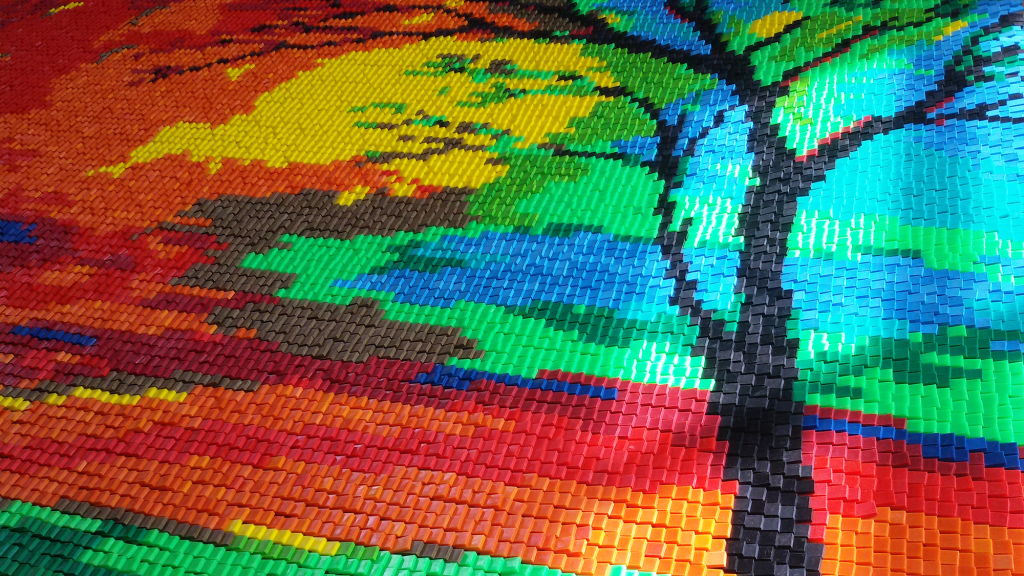 For the 2016 Easter meeting, we chose to build a large field in a colorful design. We had been wanting to build this field for quite some time, but at the Easter meeting we finally had the opportunity to do it. To make the sunset as beautiful as possible, dozens of colors were used. From […] 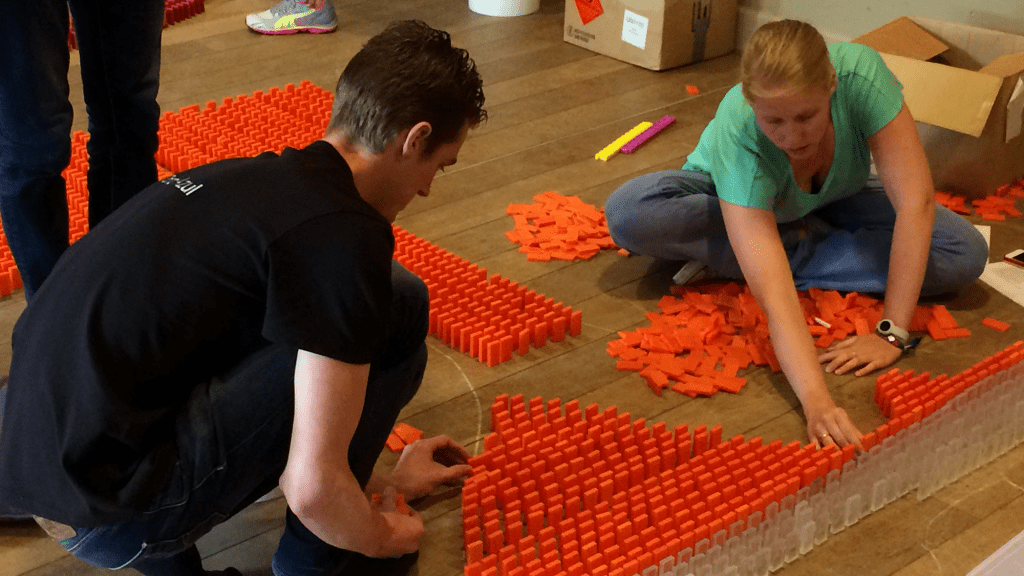 For this workshop, we depicted the 6 value systems of CPU in dominoes. How this actually happened was completely free to the cursists to decide. They were divided into 6 groups and each had to work out a theme. Several things were portrayed in more than 18,000 dominoes, which means that a lot were built! […] 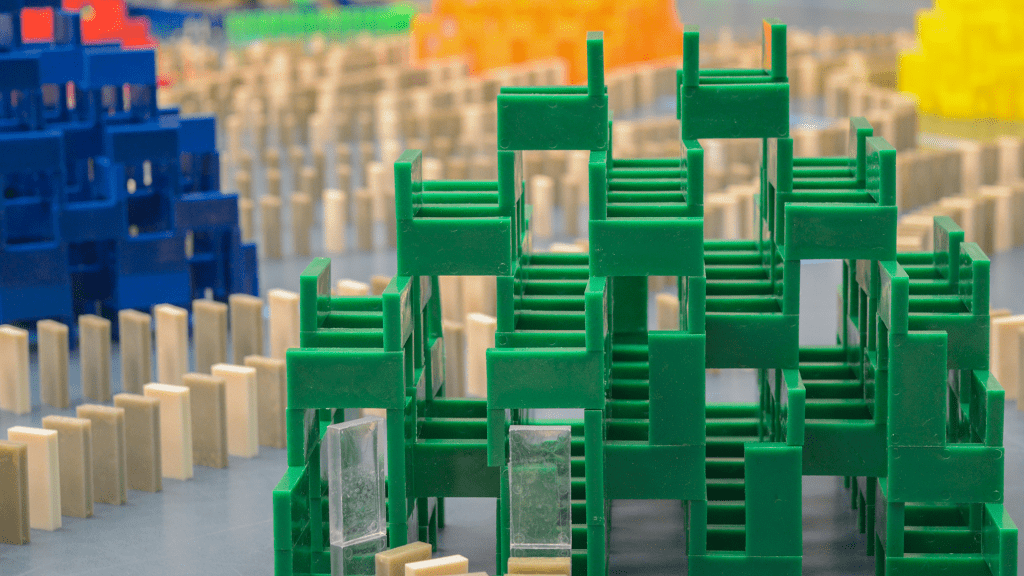 In 2016 the theme of our event was ‘The Beauty of Art’! Because you can make the most beautiful creations with domino, we put ourselves to the test to depict different types of art. We tried to include as many different forms of art as possible in this project. From modern to classical, from stained […] 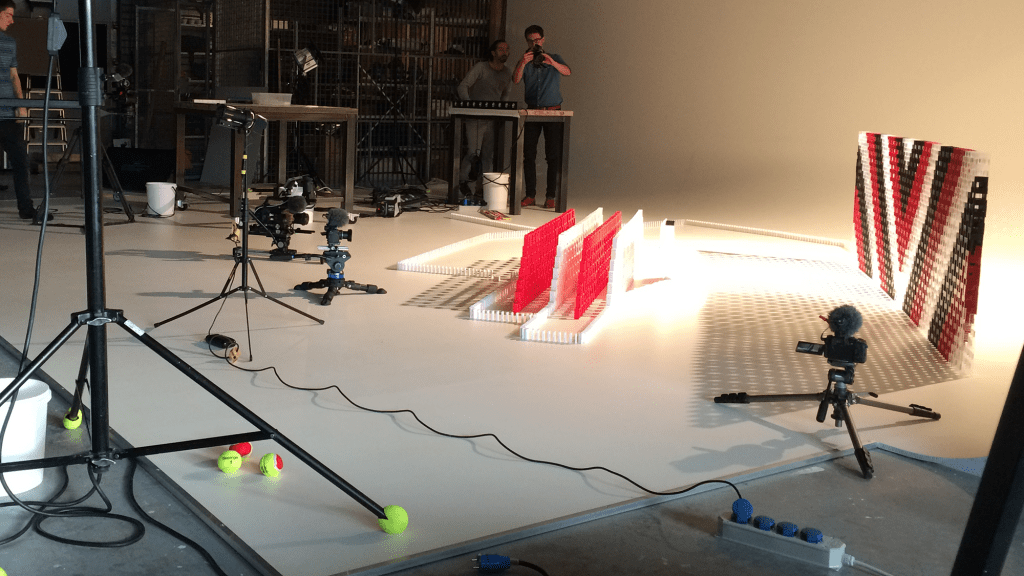 In December 2016 we entered into a partnership with Filmmakers Harderwijk. Here we made a promo video commissioned by Talpa. Using the dominoes, we were able to make some spectacular effects. In this film, we have combined dominoes with fire. We also used dominoes to reveal certain information. This has resulted in beautiful images, which […] 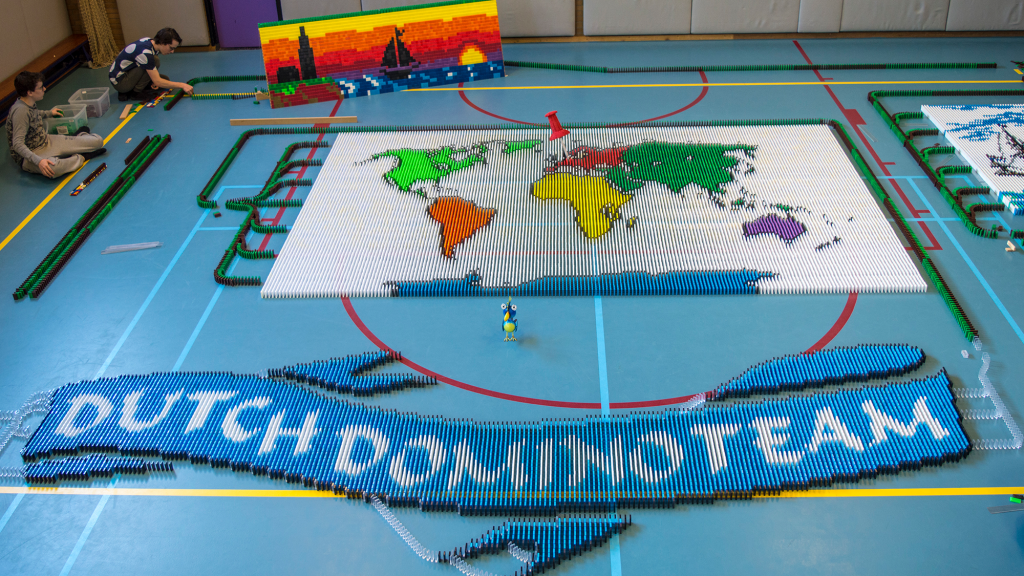 The Easter meeting of 2017 did not actually have a specific theme in advance. During the preparations we went looking for a cool design for a large field. We soon came out on a world map. We lightly themed the surrounding projects on maritime shipping. A nice detail is the pushpin in the world map […] 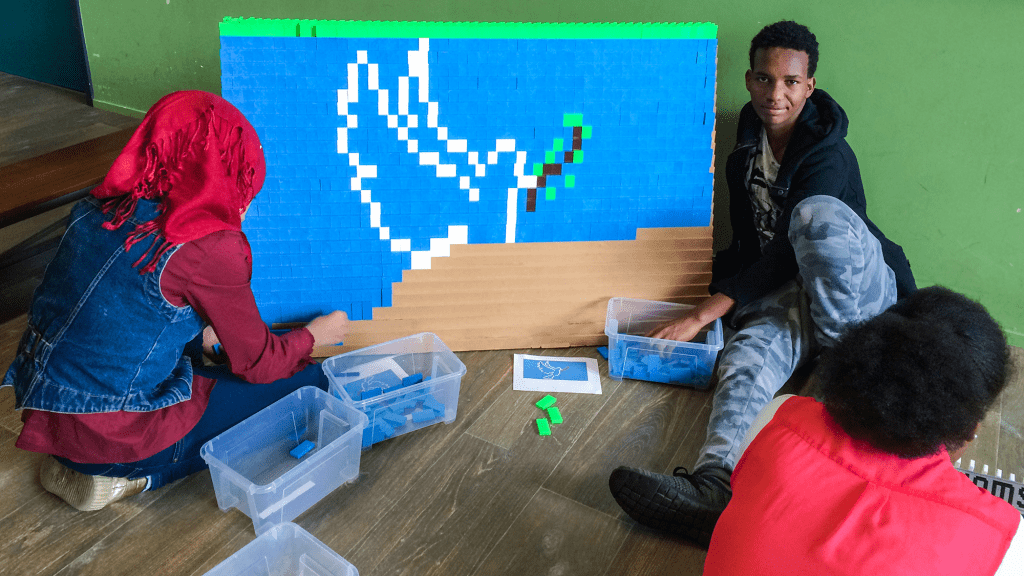 This workshop was a very educational project for both the participants and us. The International “Schakelklas” (ISK) in Arnhem consisted of a group of young people who were working on an integration program in Dutch society. Domino is a perfect activity for that, because collaboration and communication come together. As mentioned, this workshop was also […] 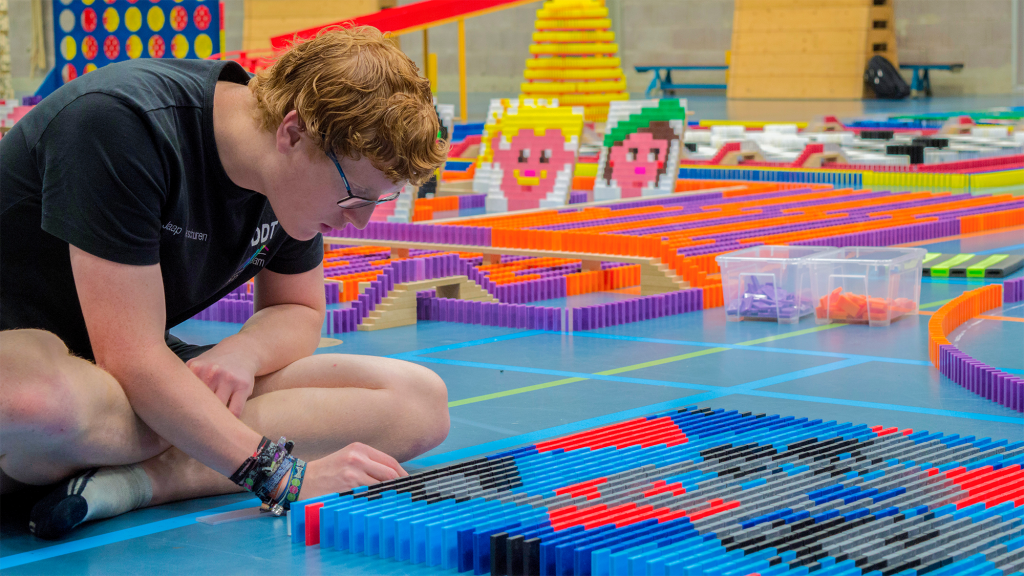 DDT 2017 was all about board games! This is a theme that may not seem very spectacular at first glance, but in hindsight, it has been one of our most challenging themes. Designing the board games was not that difficult, but how do you portray how the game is played with just domino stones? We […] 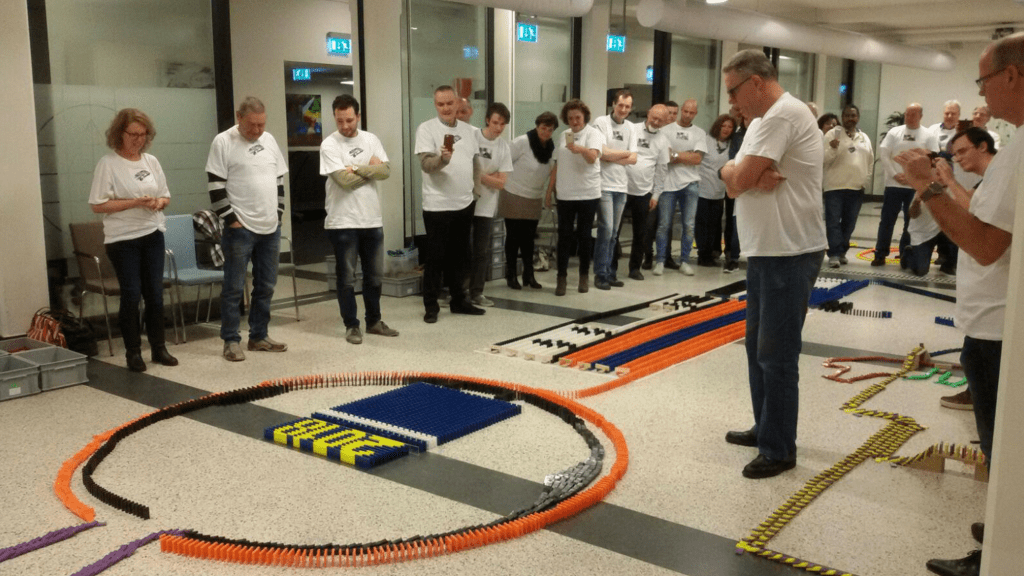 At the workshop of the truck manufacturer DAF, the cursists were challenged to portray typical aspects of DAF with domino stones. For example, they built a truck and their own logo depicted on the floor surface. […]